MY BACK CATALOGUE part 23 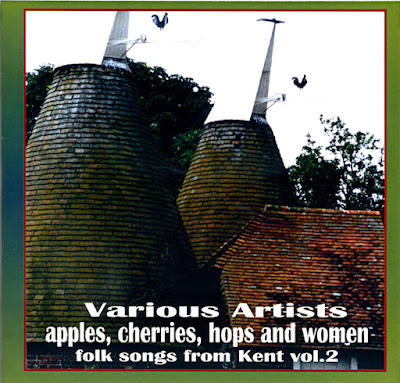 In some ways this was ‘the difficult second album’. When we made The Keys of Canterbury we were able to pick all the well known, really good, Kentish songs. For this one we had to delve a bit deeper but came up with equally good, if less known, material. We also had some enforced changes of personnel: Bing Lyle was absent playing with a theatre company in Canada, or something like that, and Ron Spicer had died. But it still all worked out well. Andy, Bob and I did our usual thing; Dave and Kath Grabham added their daughter Heather to perform as Tan Tethera and we brought in Maria Cunningham who sang her tribute ‘To Ron’ and a skit on one of Ron’s songs—PYO. There was also Ian Lawther, who I’d met at Faversham Folk Club, and brought in to play pipes on Captain Ward. Continuing the link with the first album my song ‘I Wish There Was No Prisons’ was collected from George Spicer, Ron’s father.

Again the album was funded by Folk Spots and this time recorded at Courtfield Studios in Ashford.

In my view the stand-out song on this collection is Andy’s Sergeant on the Wagon Train but his other song brought in a nice reaction just a couple of years ago. I sold the very last copy to a woman who was thrilled to find an album with a song about the wreck of The Woodside on it.  One of her ancestors was Captain Milton who died in the tragedy and is named in the song. A case of traditional songs still having contemporary resonance.

A Sergeant on the Wagon Train (Andy)

The Woodside (Andy with Pete on guitar)

The Cobbler and the Butcher’s Wife (Tan Tethera)

PYO (Maria with Pete and Andy)

The Samphire Girl (Bob with Heather)

I Wish There Was No Prisons (Pete and the company)

Here is I Wish There Was No Prisons:  https://www.youtube.com/watch?v=0qSWf0zFvYo

I produced an A4 booklet ‘The Kentish Songster’ with all the words, music and notes to this album and Keys of Canterbury. Hard copies sold out a while ago but you can download it as a pdf from my web site.