MY BACK CATALOGUE part 15 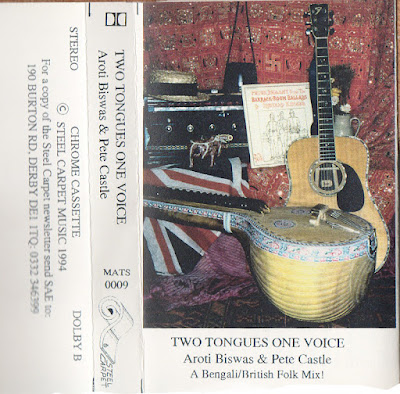 This Bengali/British folk mix was released in 1994 although  the tracks were recorded at various times in the previous 10 years. It was centred on the two tracks with Bengali musician Aroti Biswas which were on my 1989 cassette One Morning By Chance (posted previously). I then added half a dozen tracks which we recorded for Chiltern Radio in about 1985/6 (I was running their folk programme at the time so was able to use the studios when they weren’t busy) and topped it up with 3 specially recorded songs one of which, Aroti, Aroti, was written by Sue to a Hungarian tune as a tribute to Aroti who died in 1990.

The album was a mix of English songs played with an Indian flavoured accompaniment and Indian songs to which I added what I could. I didn’t make a great effort to sell or publicise it widely—there was no internet in those days so it was difficult—but it sold at the events we did together in Luton and I took it round to my gigs and some brave people did buy it. In recent years people have said that it should have been more enthusiastically greeted by the folk press but it was ahead of its time, World Music was in its infancy and the folk scene is very conservative. I'm pretty sure there was also some racial prejudice around.

I met Aroti because out children went to the same school in Luton and we both appeared at local events, often arranged by the Community Relations Council. She did a lot of work within her community and ran an Asian music school teaching singing, harmonium, tabla etc. I don't know which of us suggested that we should try playing together. It was not easy but it was interesting and was beginning to work when Aroti was diagnosed with cancer.

This review from a forward looking critic sums it up:

“It’s an interesting collection, although some tracks like Lord Bateman work the cross cultural approach can at times sound a little rich for the UK palate. None the less there are some inspiring moments here especially Two Magicians and Castle’s own ‘Dark Eyed Girl’.”   (Rock N Reel) 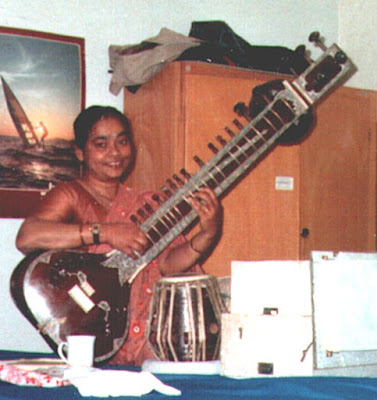 The Other Side of Jordan

The Seige of Delhi

Here is The Other Side of Jordan which I’d previously recorded with Jez Lowe on my Rambling Robin LP.

MY BACK CATALOGUE part 14

This is by far the biggest seller on the Steel Carpet label. It sold and sold as a cassette and continues to sell now on CD but it came about by accident. 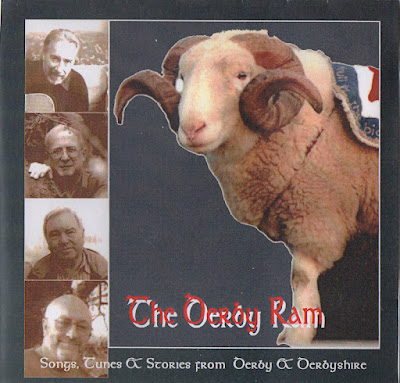 I had been living in Derby for 5 or 6 years but wasn’t doing much Derbyshire material because I can’t say ‘e’ oop mi duk’ right, as I put it. I had made the decision that I wouldn't try to before we even moved from Luton. But fate stepped in! One day I went into a touristy shop in the middle of Derby run by Richard Felix (later known for the TV ghost hunters programme Most Haunted) to see whether he would be willing to stock my tapes. He was very willing but said that what he really needed was a tape of The Derby Ram. No problem. But why just have one track? Keith, Roy and Derrick were very keen to come on board and that was that.

It was the first album I recorded with Ken MacPherson at Track Station under the railway arches in Burton. That was to be my recording home for the next few years. Ken was a pleasure to work with and always came up with a great product. It was easier to go down the road to Burton than to Colin’s in Felixstowe too!

All Through the Ale   (Roy)

One More Dance and Then   (Derrick)

EXTRA TRACKS ON THE CD

There Are No Coal Mines in the Sky   (monologue by Keith)

I still sing 6 Jolly Miners a lot. Here it is: https://www.youtube.com/watch?v=S6xHaGypkQA

BUY the album at my gigs or from my web site. https://petecastle.co.uk/

MY BACK CATALOGUE part 13 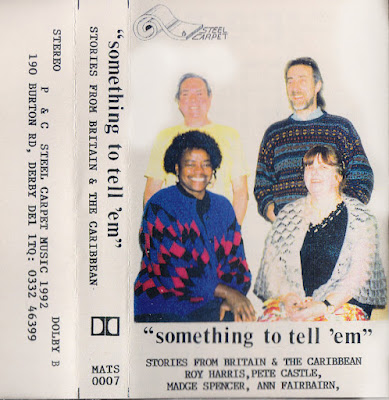 Tales at the Tiger was one of the first storytelling clubs in the country. It was started by Roy Harris as an offshoot of the  Traditions at the Tiger folk club in Long Eaton between Derby and Nottingham which is still running in a different guise. This live recording by four of the regular tellers was a souvenir/come publicity exercise. When Roy moved down to Cardiff I took over the running of the club and, after a while, moved it into Derby. A couple of years later I closed it when we lost the venue. I've  always regretted that, we should have found another venue and carried on. Roy Dyson, who had also been at Tales… but wasn’t on the recording for some reason, then started the famous Flying Donkeys club which ran for many years.

Something... is a pretty good sample of a typical storytelling night back then. It’s all quite simple but none the worse for that. Storytelling has developed since those early, simple days but there are pros and cons to that.

A review: “A collection of stories told with great gusto and with a definite tendency towards the grisly with plenty of ghoulies and ghosties and bizarre goings on. Great stuff for keeping the kids quiet in the back of the car while you’re stuck in traffic on the way back from Sidmouth.”

Why, oh why, do reviewers have to mention kids just because it’s stories. One did about Willie’s Lady on the previous album and that is definitely not suitable!

Something to Tell ‘em. Pete. I still tell this regularly

The Big Toe. A jump story by Roy who learned it from Richard Chase

The Ghost.  Madge, a Caribbean parallel to the above

Orange and Lemon. Pete. I still do it occasionally and it’s in Folk Tales of Song & Dance

The Phantom Hitchhiker. Pete. One of the classic urban myths

MY BACK CATALOGUE part 12 Another album recorded by Colin Whyles at Felixstowe with some additional work by Doug Porter at VOR in Derby. Doug was also responsible for all my cassette duplication around that time.

This was a good one, it took what we did on One Morning to another level. Apart from Mr Leakey from the Tale of a Village tape all the tracks were traditional. Willie’s Lady was a story which frightened a few people! The Lakes of Ponchartrain was an excuse to use the Leakey Band again. That track didn't work as well as I wanted but it was OK.

This was the first time Bing Lyle had been on one of my albums. He was to be on many more over the next decade or so and we worked together a lot in clubs and concerts and especially in schools. He was introduced to me by Gail Duff to work together on a schools project in Kent and we immediately hit it off. He was (is!) one of the most musical people I’ve ever met and the interplay between his accordion and Lucy’s fiddle is perfect.

Reviews were generally positive but it was interesting to see how individual tracks divided people being praised to the roof by some and slammed by others.

“In a field which can be said to be sparing of innovation by its very nature, Pete constantly slips in a little something new; seldom, if ever, could these efforts be accused of being ‘change-for-changes-sake’.”  Nigel Hamster: Folk On

The Lakes of Ponchartrain

Listen to Brigg Fair, one of my top tracks. https://www.youtube.com/watch?v=pbGtV0AF1pw

The picture shows the tape cover and a booklet containing words, music and notes. I did one for several of the albums around that time, mainly because you can’t get many notes on a cassette cover!

6 of the tracks were on the ‘best of’ CD Xtracted in 2000 and I still sing about half of them.

MY BACK CATALOGUE part 11

This album was not important in itself but the project which gave birth to it was and influenced a lot of work I did afterwards. 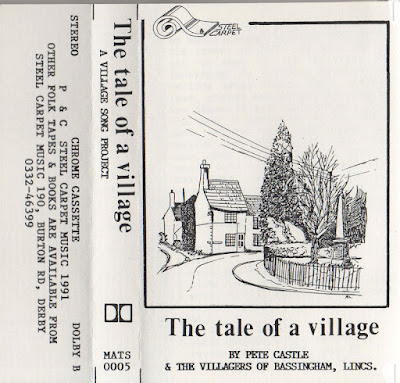 In 1990 I was asked by North Kesteven District Council if I’d like to run a project in the village of Bassingham to involve the villagers in writing songs about the village. My memory says that it was somehow through Rosie Cross, who I knew through the band Pyewacket, but I have no record of that. A year or two before I had been in the band for a community play in Derby (West End Best End) and was excited by the form so I leapt at it.

Over the next 9 months or so I worked with individual villagers and groups including the primary school, the WI and the Nursing Home. They wrote some songs and I used their info to write more and we came up with 10 songs in total. At the end we performed them in a concert at the village hall which was recorded and broadcast by Radio Lincolnshire. I wrote at the time that it was one of the most enjoyable gigs I’d ever done. Then I produced this cassette which was obviously mainly for local consumption but might have sold a few more. Most of the songs would have only been of interest to the people of Bassingham except for The Ballad of Mr Leakey. This was a great melodramatic (true) story about a Victorian vicar, a suicide, a ghost and a stain which always returned however much it was washed away!

The song I wrote from info supplied by several different people worked really well. I intended it to be performed by the local village pop group—lads of about 15/16—and they did play it at the concert, but I made a major mistake, I wrote it in 3/4 time and kids don’t understand that. The drummer, particularly, struggled! So for the tape Colin assembled a band of his friends with an American airman from the local base on lead guitar (thank you Robin Crandell). I told them to make it sound like Dire Straits, and they did. I love it!

Later I included it on my Cottage By The Shore album which will be next up.

The Tale of a Village

If It Wasn’t For The War

The project and the whole experience laid the ground work for later work such as the Mountsorrel Community Play and The Jenny & the Frame & the Mule at Cromford.