I might have found an important new source singer... but it's too late to know!

It was about the song 'I Wish There Was No Prisons'. This time I'd like to return to the song but from an entirely different angle.
As well as writing a Blog post about it I had previously posted a You Tube video. It might be a good idea if you looked at that as well before going any further... click here to listen

'Prisons' is a folk song from Kent. All the accepted sources will tell you that the only time it was collected in the tradition was from George Spicer, a farm worker from Kent who later moved to East Sussex. It can be found on a Topic LP of his songs – 'Blackberry Fold'. I recorded the song for a CD of Kentish folk songs mainly because it was a jaunty piece of nonsense. The only other person who has recorded it, as far as I know, is the East Yorkshire singer and pleasure boat man Jim Eldon who credits George Spicer as his source.

I was therefore, very surprised to get an email, out of the blue, from a man called David Rogers, asking about the song. He'd heard my version and immediately recognised it as a song his granddad used to sing! This is what he said:


Hi Pete, Hope I can get some help with my query, here goes.
I grew up with my great-grandfather and great-grandmother in Sussex from age 18 months. Ernest James Rogers lived in Kent for much of his life, moving to Sussex when he was in his 50's (I believe). He served in the army (Buffs Regiment) in the Boer War, in Northern Ireland in the Risings, and in WW1 - all over the place until he was invalided out on medical grounds. He was an inveterate story-teller and song-singer, and had a good voice. Among those I can recall was the ’Oakum Picking song’. However, having researched the title I find that the only versions I am able to find differ quite markedly from the one he, and I later, sang. I appreciate that my memory may not be all that it was, but these are the words I recall.

"I wish there were no prisons, I do, don't you?
'Cause Oakum Picking gives me such a licking,
When I go in for a little bit of nicking,
With me hands, with me dukes,
With me dukes and dirty maulers."

(which isn’t, actually, very different to George’s or mine…)


He (Ernest) and his wife lived in Whitstable immediately prior to moving to Sussex. He had a Shoe-makers Shop (hand-made boots and shoes); she was manager (and possibly proprietor) of a General Store in the town.
Ernie's family were Kentish people, in the main farm labourers or tenant farmers. At one point he worked in the Asylum at Chartham as a mortuary attendant as well as a 'water-boy' in his earlier life. I guess all these types of employment would have left him open to a wide range of occupational songs. Indeed, I was told-off many times for singing various of his army songs in the presence of my Gt Grandmother, who was a truly Victorian lady, who had trained as, and worked as, a school teacher in her younger years.
I wonder if you are able to advise whether you know of any other versions of the Oakum Picking song; and/or if you've ever heard the version I related?


In further correspondence David went on to tell me more about his very complicated family and, in particular, Ernest:

“Some years ago I had begun to write as much about my childhood with Ernest James and Helen Mary (his wife) as I could recall, believing them (at that stage) to be my grandfather and grandmother. We all lived in what amounted to a tin-roofed, wooden bungalow which Ernie and his sons had built in a 3 acre plot of woodland in rural Sussex...
The longer I live, the more I respect him, both as a man and a tutor/teacher. Never having known a father, he became, I guess, my father figure. Indeed I recall calling him Dad quite often. He never complained nor did he try to stop me using that title.
I learned the interest and keenness that I began to acquire (from 18 months or so) throughout my childhood and up to his death when I was 16'ish from him. There seemed never to be a job he wouldn't have an attempt at, even though he readily admitted he might know very little about it.
While I cannot quite remember all the steps and stages he demonstrated in making shoes, for example, much of it still sticks in memory, and my love of working with leather, wood and metal certainly either came directly from him, or from (some of the) genes passed down the Mulligan line (his father). 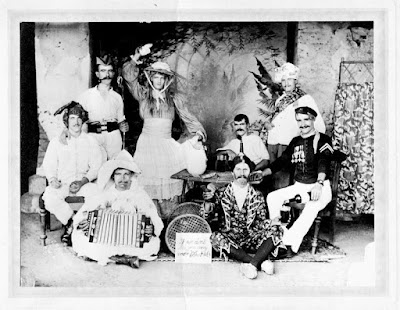 David’s father was a Canadian soldier who had a relationship with an English girl and, when David was born, admitted that he was already married in Canada.


“My father dabbled in repairing and selling motor vehicles before he joined the RCEME and was posted to England as Captain Mulligan, where he met my mother. She was in the army too as an NCO. As was the case for many, they fell in love, she became pregnant by him. When I was born and he saw and held me, he apparently admitted that he was married back in Canada, wanted to take me back with him, but my mother gave him his marching orders, and the rest as is said, is history.

Because of illegitimacy on his mother’s side in a previous generation it turned out that David’s aunt was actually his granny and his grandparents were in fact his great-grandparents… (I said it was complicated!) This is why Ernest is so much older than one would have expected. As well as I Wish There Was No Prisons/The Oakum Picking Song Ernest had other songs one of which is a mystery:


“...since I wrote to you (and received your response) I have spent a lot of time trying to recall all of the songs that Ernest James (my great-grandfather) used to sing, and I, as a child sang along with him, or at least tried. Thus far I haven't been terribly successful.
One phrase from a song, or perhaps it was a poem, or piece of prose, has returned. The words which came back to me were "And we all went up to Chitral (pronounced ChittEral) for to hear the cannons roar!"
Then later came additional words from the same piece, something like: "and while the lads were doing their stuff, Lord Chinnery was in dock!"
“Chitral is on the north-west frontier of India, in the mountains. Ernie had been (as he often said) "In India" though apparently not in the Indian Army as some of the family had believed, but with British forces.
He regularly spoke about enlisting under false papers, about the Boer War, about being in Ireland during the 'Risings',and before being invalided out of the army, fighting in France in WW1. Ypres, Verdun and other names of battles and places were mentioned in relation to where he had supposedly been fighting.
Whether the reason for his 'being unfit for service' is related to a gassing and related breathing difficulties he later suffered, or the trench-foot which he had graphically described Ernie was an inveterate 'story-teller' and Oh how I wish I had listened more carefully when I was a toddler and as I grew up. I daresay there are many, like me, who wish the same! 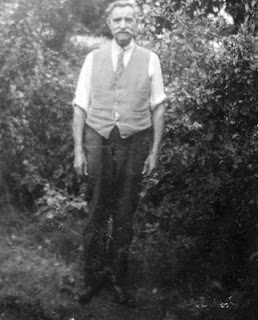 Part of one tall tale which I do remember related to when he was serving in India, the British troops being on one side of a substantial river, and the 'enemy' on the other.
Apparently, there was plenty of fruit growing on the opposite side of the watercourse, and none on theirs. Thus, Ernie and a mate swam across under the cover of darkness, avoiding the sentries in the enemy camp, managed to collect a couple of sackfuls of fruit and make their way back without discovery. Whether this was true, or even had any grain of veracity in it remains a mystery!


Like David I have been unable to trace the Chitral song. Chitral was an important campaign in the Afghan Wars (1895) and much has been written about it but no-one seems to know the song/poem. (Do you?)


So Ernest James Rogers seems to have been pretty much a contemporary of George Spicer living in much the same area (north-east Kent) and sharing at least one song—I Wish There Was No Prisons. George admitted to not remembering where he learned the song and regretted that he had never got the rest of it. Wouldn’t it be great if his source was Ernest!

“It would certainly be interesting to see if the use of any of Ernie's snatches of songs /prose /poetry might jog any memories and elicit any kind of response from anyone else out there in the wilderness, wouldn't it?
I'd be happy for you to mention names, and if any responses came back, to provide them with my email address if requested.”


So if anyone out there knows any more about the Chitral song, about Ernest James Rogers or anything else relevant please get in touch and I’ll pass it on to David.