Well, sort of… it’s not about the first stories I had read to me when I was tiny, or the first stories I read to myself when I was a bit older. I’ve written elsewhere that when I was a boy I read all the Henry Rider Haggard books plus things like Coral Island—real ‘boy’s books’! When I was a bit older still I liked SF and fantasy and I’ve always been (and still am) a lover of short stories. I’m sure that impacts on my choice of stories to tell now—even the fact of being a storyteller. Neither is this about the first tall tales and jokes I can remember hearing when I was growing up. (That might make a good post one day although it might easily get censored! Playground humour can be pretty rude!)
What this is about are the first stories I remember hearing when I became interested in the art form we call ‘oral storytelling’.

I must have discovered storytelling in the early/mid 1980s because, by the time I moved to Derbyshire in 1987 I was including stories in my performances. I soon became involved with story clubs in and around Derby and Nottingham—I went to them and ran a couple myself.
There are three specific stories I remember from that time. They were stories which everyone seemed to know and you could almost guarantee that someone would tell one or other of them at most meetings. I learned them by osmosis rather than on purpose and two of them have remained in my repertoire ever since, although I usually reserve them for ‘lay’ audiences rather than storytelling experts. A specialist audience will probably know them too well and consider them hackneyed, in the same way that The Wild Rover was done to death in folk clubs. 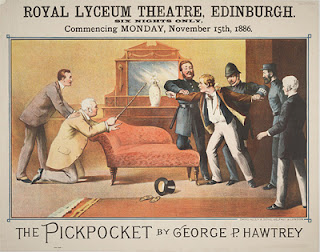 Again I have no idea where The Pickpocket originates. It’s been through a whole range of throats before it reached mine so it is ‘traditional’ in that sense but I suspect it is not terribly old. If the person who ’made it’ hears my version I hope he likes it. (On the other hand it has a sort of Jewish feel about it… there’s a Yiddish song about Avremi the Pickpocket: “I’m Avremi, the most talented pickpocket, a great artist, I work lightly and surely…”)
There is a vast difference in attitude to the ownership of stories between tellers in Britain and the USA. Here we, on the whole, love to hear other people tell or sing stories and songs we have had a hand in making. Discussion forums/Facebooks etc in the USA though, are full of handwringing  posts about ‘how can I copyright my material to stop other people using it?’; ‘I heard someone telling a story I made, should I sue?’; and such like. From a purely personal point of view I love it when, as has happened, I hear a song or story which has obviously been taken from ‘my’ version. Sometimes you get credited— “I learned this from a recording by Pete Castle” - but other times the teller/singer might not know that I actually put that verse into the song to explain the story more, or added the motif to the story to improve it. It may have been through several voices between me and him. In that situation I have a lovely, satisfying feeling of something well done. A bit of ‘me’ has been accepted and has entered into the Tradition. That’s the most you can hope for. 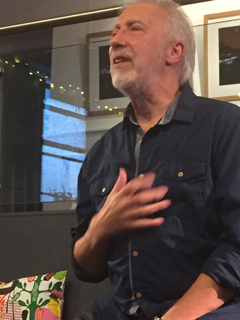 If you'd like to know more have a look at my web site  http://www.petecastle.co.uk

You may also like to consider subscribing to Facts & Fiction storytelling magazine (  http://factsandfiction.co.uk  )  It's quarterly and covers all aspects of storytelling with news, reviews etc