TO THE CENTRE OF THE EARTH - AND BACK

Fictional journeys down into the earth are amazingly common in novels and folk tales...

The most famous is probably Jules Verne's 1864 novel Journey to the Centre of the Earth which has been filmed (badly!) several times. In it professor Otto Lidenbrock, his nephew Axel, and their guide Hans descend into the Icelandic volcano Snæfellsjökull and make their way downwards through the 'volcanic tubes'. They meet all kinds of weird geology and nature, find a vast underground ocean with marine and aerial dinosaurs, an ape-man or possibly man-ape who they avoid because he seems dangerous, and eventually make their way back to the surface via the Stromboli volcano in Italy. It's good fun but sheer hokum.


It was by no means the first story to consider underground worlds though.


Leaving aside the idea which anyone interested in storytelling will be very aware of – that the Fairies or The Good Folk live in or under hills or mounds - it is a common idea in folklore everywhere.

In my History Press book 'Folk Tales of Derbyshire' I told the story of The Devil's Arse. Many of you may know the place, the huge cavern at Castleton which has been used as a shelter and workplace for centuries, probably since man first came to the area. For a while the tourist industry politely called it Peak Cavern but the old name is much more attention grabbing! (Victorian writers politely called it Arx Diabolo or Aunus Plutonis! But what's wrong with good old Anglo Saxon!)

The story, which goes back at least as far as Gervase of Tilbury, a 13th century monk, tells how a swineherd of the Lord of Peverill Castle, which sits on the hill above the cave, lost a prize sow and in his searching wandered into the cave. Thinking, for some reason, that the sow may have wandered into the depths of the cave looking for a place to farrow he made his way down into the depths where he found himself in a glorious, fruitful landscape: “Spread before him was a fertile valley with happy-looking peasants working in fields of golden wheat. There were orchards, the trees were laden with ripe fruit, and there was a road lined with fields of luxuriant vegetables which led to a village of neat houses…” It was a far cry from the grim, cold, dark Derbyshire evening he'd left above.


He would have loved to have stayed but he immediately found the sow and set off to return it to his master. Later he tried to find his way back to that very promising land but, somehow, he could not find the way. When he grew old he told his son all about it and he too tried to find it but with no luck. Generations of Derbyshire people have searched every little passageway in the Devil's Arse, and there are plenty of them, but no-one has yet succeeded in finding their way – or if they have they've not come back and told the rest of us! Who knows what wonders and treasures, what possibilities, there are down there!

So that is the journey to the centre of the earth, or at least a good way down... but how about back? 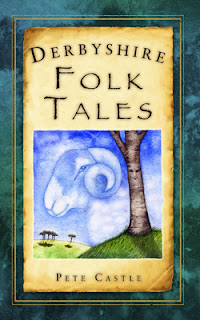 I hadn't considered that there might be stories telling about how those troglodytes might sometimes, accidentally, find themselves in our world. Then, recently, I had a stall at a book fair and for the first couple of hours there were very few people about so I took the opportunity to read some of the tales in The History Press' Anthology of English Folk Tales. It is a collection of about 30 stories from the county folk tales series. (The Gypsy Boy from Nottinghamshire Folk Tales is my contribution.) One tale I read was the Suffolk tale 'The Green Children' retold by Kirsty Hartsiotis. It's a story I have been aware of for a long, long time, since before I became a storyteller I would guess. But reading it again I was grabbed by an idea I hadn't noticed before.


The Green Children is also ancient being first recorded in the 12th century. It tells how some  poachers find two children, a girl of about 10 and a slightly younger boy, huddled in the bottom of a pit in the woods near the town of Woolpit. The strange thing is that they do not speak any known language and their skin is green! The poachers take the children to the manor house at Wikes where Sir Richard takes them in and looks after them. Gradually they learn to eat human food and to speak English. As they do so they also begin to lose their green colour. Eventually the boy dies but the girl thrives. One day she tells Sir Richard and his friends where she came from and how she came to be there. This is Kirsty's telling: 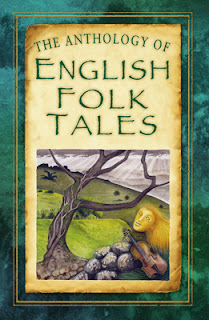 “My brother and I were herding our father’s sheep that day. Our land isn’t like yours, but we do herd and farm like you do. I did this every day, but he was new to it, being young. One of our lambs got lost, and we set out after it. We could hear him bleating, so we just kept on going until we were far from our home. It was coming on for night when we found him, and when we turned to go back we realised we didn’t know the way. So we just walked and walked, and then, in the darkness, we both fell, and we plummeted down a long way until we landed on dry earth and saw a tunnel stretching out. There were strange sounds all around us, sweet sounds, the like of which we’d never heard before, and those sounds drew us. We walked towards them. It seemed me that we walked all night. At last, we saw that there was light ahead, and we ran, hoping we’d be near our home, but as we came out the light was so bright that we both fell down in a faint. When we woke up those men were there, and they dragged us out, and it was so bright and so strange…”


So it seems that the inhabitants of the underworld tell the same story about stumbling upon our world as we tell about theirs!

The Devil's Arse is by no means the only way into this underground world. Another very famous one is at Rathcroghan in County Roscommon in Ireland. It is an ancient site with archaeology going back through the Iron, Bronze and Neolithic ages. As well as human remains the site includes the mysterious cave of Oweynagat, 'Ireland's Gate to Hell'  an entrance into the underworld!


Putting aside folklore and considering the views of a historian, Francis Pryor, in his book Britain BC describes Seahenge, an ancient monument on the coast of Norfolk:


“At Seahenge a small circle of fifty-five posts surrounded the lower trunk and roots of a large oak tree... It had been lowered into a pit upside-down so that the roots protruded above the ground [and the branches were in another world]. Richard Bradley has shown how the Sami... carried out similar rituals with inverted trees. These rites were connected with their belief in an underworld that existed upside-down beneath our feet. It is likely that something similar may have existed in the ideologies of Neolithic and Bronze Age Britain.”


So perhaps this ancient religion has survived to the present day in these folk tales—it has been proved that some tales have their origins 5 or 6,000 years ago. (see my Blog from Feb 2016   CLICK HERE