I'M NOT A GUITARIST - JUST SOMEONE WHO PLAYS A GUITAR

The best thing my parents ever did? 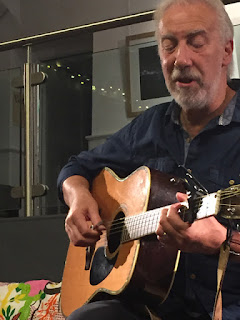 I don’t think of myself as a guitarist although some people do and I have been asked to run guitar workshops and so on. (My philosophy about that—as it is on the subject of singing or storytelling—is just do it. You don’t need to be told what to do or be given permission, if you want to do it you will and it’s up to the rest of the world to stop you!)
Many of the reviews of my recordings and live performances over the years have picked out my guitar playing. But it isn’t what interests me most. To me the important thing is the song. The guitar part is just an accompaniment and takes a secondary role. I never spend long on working out my guitar part. When I find a song I want to do I choose a key and then play it. It either works or it doesn’t. I might swap keys or chord shapes by using a capo but I don’t sweat blood on it. If it’s not be it’s not to be. The only frustrating thing is when I have a really good song and a really good guitar part but I can’t sing it in that key even with the use of a capo!

It would not be too much of an exaggeration to say that my whole life was shaped when my parents agreed to buy me a guitar when I was about 14 or 15. I can’t remember exactly when it was or whether it was for Christmas or my birthday. I do know I was amazed that they agreed to buy me one. I thought I’d have to fight for it!

Anyway, that first guitar was your usual cheap, beginner's one. For some reason I think it cost £3.10s 6d. It wasn’t very good but it was good enough for me to get started, with the help of Bert Weedon’s ‘Play in a Day’

A year or two later I got a better one—a Hofner Senator f-hole one which I really loved. I wish I still had it because it looked so good!(picture left)

I fixed a pick-up to it and it did me for playing pop and rock with my mates (although later I borrowed a green, solid, electric for gigs because it looked better!)

I had just a few lessons but soon gave that up because the ‘old’ teacher (probably about 40!) was so rigid and boring. But he got me going. Then I played all the time with mates. One particular friend called Colin used to come round on Saturday evenings and we’d go through all The Shadows repertoire taking it in turns to play the chords or the melody and then swapping over. It was great practice.
Playing with someone else makes you get the timing right - you can't slow down on the hard bits and rush the easy bits!
Later that progressed to bands and playing music by the Stones, Chuck Berry, even Muddy Waters and Bo Diddley.
My 'Beat group' days!

I have, only half jokingly, said that my guitar was responsible for me getting together with my wife of nearly 50 years now. We met at college. I had a guitar, she had a Joan Baez song book so together we could do something at the folk club. (They didn’t want solo Bo Diddley and the only vaguely folky thing I could do at first was The House of the Rising Sun!)

After college I continued to go to folk clubs and needed a more folky looking guitar. I bought a BM Mammoth. (No, no one else has ever heard of it either!) It was a huge guitar which made a small sound. Someone said it sounded like a lute. But it got me going as a professional and I used it on my first few albums. I still have it although I can’t remember when I last played it.

I had a huge slice of luck in about 1984. I knew I needed a better guitar to take my career to the next level but wasn’t seriously searching yet. One day I happened to pass a music shop which had a ‘closing down sale’ on—’everything half price’. I casually tried a few guitars and fell in love with a Fender. I’ve used it ever since. I’ve tried a lot of others—real top of the range Martins and hand made ones but I’m happy with my Fender. It’s been a bit bashed about and dropped and had a little bit of work done on it but it just gets better.

I’ve never seen another model exactly the same. There are similar ones around but they seem like cheaper imitations. Someone who knows more about these things than I do suggested it may be a custom model… (someone had it made and then didn’t want it? Well he did me a favour!)

On the subject of guitars and guitarists: I have often been amazed at how people sometimes judge you just by the instrument you use. You go into a folk club and someone asks—what kind of guitar do you play? They then decide whether they like you and whether you are any good or not without you even opening your case!
They are probably the same people who arrive early, spend a long time tuning up and playing the most amazingly clever little guitar bits and you think they are going to be good. Then, when it’s time for them to do their spot, they do something very ordinary and mediocre. The other thing I don’t like are singers—sometimes highly thought of professionals—with whom the song takes second place to the guitar. In other words they accompany a fancy guitar piece with a song when I think it should be the other way round.


My You Tube channel where there are many more songs and stories:
https://www.youtube.com/channel/UCq6xTFVShO_jo3Y-Q9rU9Hg/videos