My meetings with South Asian communities 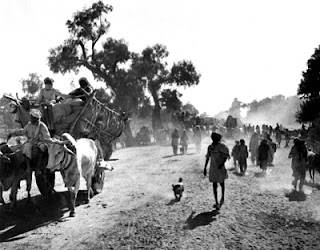 It was yet another example of a British colonial cock-up.  We had done the same with Ireland 26 years before and that hadn’t worked.  You can’t just chop one country into two. But we didn’t learn. We just chose a civil servant who had never been to India and got him to draw the lines on the map at very short notice, and then continued to change them right up to the day before the event, so millions of people didn’t know which country they were going to finish up in, resulting in about 1 million dead in racial/religious killings!
Throughout my childhood ‘India’ featured in my reading books and comics. But it was a glamorous, mythical India of elephants, palaces, men with turbans, women in harems… a random mix of Hindu, Muslim, Sikh images. Nothing real.


I first met an Indian when I was about 8. I was brought up in Ashford, then a small market town in Kent, and we rarely saw anyone who wasn’t white-British. Then , when we went back to school after one holiday a rumour flew round our class—there’s a new girl coming, and she’s black! I remember quite vividly the fact that Rodney was in floods of tears, he was terrified! He had the empty seat beside him and this wasn’t only a girl, which would have been bad enough, but she was black!


It turned out that her name was Diana. I think her mum was Indian and her dad might have been an English doctor, so she wasn’t very black! I thought she was beautiful and wanted her to be my girlfriend—without much luck, although I did manage to steal a kiss one day when we were playing kiss-chase.

Most of my adult life has been spent in much more cosmopolitan places—Nottingham, Luton, Derby… where there were large immigrant, particularly South-Asian, populations. Sue and I had a lot of contact with them and made some good friends.  (Belper, where we live now, was strange because it was mainly white when we arrived but it is gradually changing.)

We lived in Luton from 1975-87. We were there when I stopped being a teacher and went professional as a folk singer.  For a while over the transition I did some Adult Education—English as a Second Language. Over the years we had a huge number of people come through our groups—mainly Indian, Pakistani, Bangladeshi, but including just about every other non-English speaking nationality you can think of as well. At first there were Chileans; whilst the Iran-Iraq war was going on we had a man from each country who became good friends; a young man from Yugoslavia predicted that once Tito died there would be a blood bath—wasn’t he right!
At that time I met—kept on meeting Aroti Biswas. She was a Bengali musician who ran the grandly named Asian Music School—it was actually just her but she taught harmonium, tabla, sitar, singing to both adults and children from right across the community, it didn’t matter whether they were Hindu, Sikh, Muslim , Christian or what. She, herself, was a Hindu and just a couple of years older than me.


We didn’t talk much about it but I gathered that she was born in Calcutta a couple of years before Partition. Calcutta became part of East Pakistan (now Bangladesh) so she and her family had to flee to India. Later she came to England to marry her husband, a railwayman.

Aroti’s children went to the same school as mine and we also met at various concerts at which we were both playing—particularly those organised by the Community Relations Council. I don’t know who suggested it but after a while we had the idea of collaborating.  Her attempts to get me singing in Bengali were not very successful  but I could play along on some of her songs. I initially thought I’d be able to find some suitable English traditional songs, the Raj equivalent of all those British songs which were taken to America or Australia and became naturalised there, but it soon became obvious that there weren’t any probably because of the type of Britisher who went to India. On the whole they weren’t going as settlers they were educated working or middle class going to do a job and then come home again. They were far more at home singing light classical songs at cocktail parties than folk songs in the bar. (Except for the  soldiers, and their songs were probably not repeatable!) 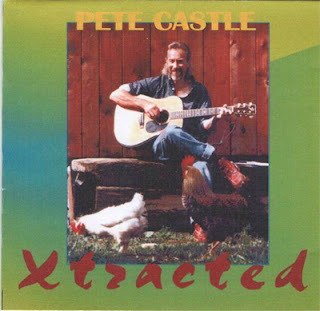 So instead I turned to the old ballads and found some of those quite suitable with  themes that mirrored Hindu mythology and modal tunes ideal for the harmonium.


Unfortunately very soon after we started working together Aroti was diagnosed with cancer. We did a few live gigs and recorded a session for Chiltern Radio, where I ran the Folk Programme at the time, but weren’t able to give it the attention it warranted. We met about once a fortnight but as time and the illness progressed Aroti became weaker and unable to play so we’d just talk, or I’d play. Towards the end she said that it was only our sessions which enabled her to keep going.


Two tracks we recorded were put on my 1989 cassette album One Morning By Chance and they divided opinion. Some people thought they were groundbreaking and exciting, others that I was spoiling good English music! One of those, The Two Magicians is on my sampler CD Xtracted. I think it was the best thing we did.

Here is a track  we did for Chiltern Radio so I was playing, singing, working the desk and everything else all at once!
click here:  THE OTHER SIDE OF JORDAN 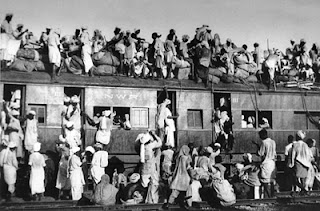 The TV and radio programmes about Partition which have been all over the airwaves for the past couple weeks have stressed how the different groups managed to live together quite harmoniously in India but as soon as the politicians started talking about breaking it up violence between the different groups escalated. India and Pakistan have diverged and become two very different countries.
When I lived in Luton all the different communities intermixed and were friendly. At the classes we ran it was not obvious who was Hindu, who Muslim. Most of the women wore saris or shalwar kameez and most had a head scarf but it was just a long strip of cloth draped over the head and very often allowed to slip off round the shoulders. Hijabs, burkas  etc were almost unknown.
I’m sure a lot of the lack of friction was down to the very active Community Relations Council, some was down to individuals like Aroti, and perhaps our class even did a tiny bit.