MY BACK CATALOGUE part 20 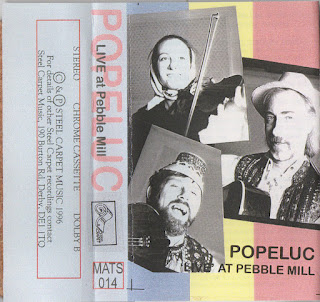 This was recorded during the second Popeluc tour. Five of the tracks were recorded by the BBC at Pebble Mill in Birmingham for the John Taynton Show and, as they had no budget to pay us, they gave us permission to do ‘what we liked’ with the recordings—hence this album. The recording and performances were too good to waste. It contains a typical sample of our live set and was recorded absolutely live with no double tracking or retakes. It is full of life. We supplemented those five tracks with  the three tracks marked* which had been recorded at Burton when we were making Blue Dor, or perhaps Maramures et Cetera. They were out-takes or alternative versions. We didn’t make many copies of the album and they soon sold out. Apart from a brief ‘reunion tour’ about 8 years later, it marked the end of the group although Blue Dor continues to sell.

When I hear the Cuckoo Calling