Attitudes to migration depend on where you are: those who emigrate are admired, they are heroes. “Look at him, venturing into the unknown to improve the lot of his family. Isn’t he brave” we say.
“Bloody immigrants, coming here taking our jobs!” we say about those coming the other way!

This Blog is supposed to be about folk music and storytelling but at the moment it is being driven by politics and world events! But, I’ve always said that one of the things I like about traditional songs and stories is that they remain relevant and that is why I am writing this post. 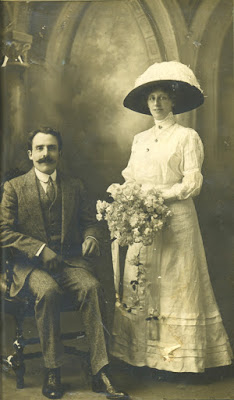 In 1912 my grandfather, Percy Castle, left England to find, what… his fortune? adventure? success? He worked a one-way trip to Australia as a ship’s steward on the SS Norseman - “a cattle boat fitted with cabins”. In Australia he found work in a factory. To his surprise his girlfriend followed him on the next ship, although that wasn’t part of their plan, and they married the day after she landed. Their eldest child was born in Australia but they all returned less than 2 years later because WW1 broke out. I don’t know whether they would have stayed otherwise? Were they emigrants or just temporary economic migrants? Life was probably much better in Australia. In England Percy had been working as a house painter and lodging with an aunt. I featured Percy and Hilda in this video/slide show which I posted last year.

The song THE FIRST OF THE EMIGRANTS dates from the 19th century and is about the first voluntary settlers in Australia—not the convicts who preceded them. The words were written by one Capt. Patrick Taylner of New York. I assume he had this tune in mind when he wrote. It usually goes to a well known Scottish song ‘Jock Stewart’ and the words of the chorus are almost the same. There are several theories about who wrote Jock Stewart. Traveller singer and storyteller Sheila Stewart says that it was written about her father Alec and posted through their letterbox when she was a girl, but it must be older than that.

Now I’m leaving old England, the land that I love
And I’m bound far across the sea.
Oh I’m bound for Australia, the land of the free,
Where there’ll be a welcome for me.

CHORUS:
So fill up your glasses and drink what you please
For no matter the damage I’ll pay;
Be easy and free when you’re drinking with me
I’m the man you don’t meet every day...

Now I’ve worked hard in Australia for thirty long years
And today, sure, I’m homeward bound
With a nice little fortune to call my own
So it’s home on a steamboat I’m bound. 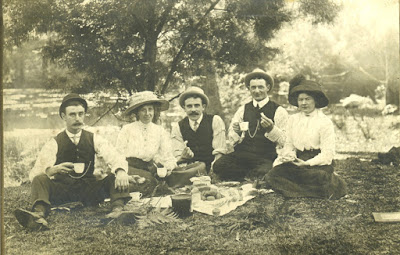 Whatever his long term plans Percy was seeking opportunity. When I thought of writing this I wanted to quote from the story about ‘the streets being paved with gold’ but I cannot find one. It’s an image everyone knows but there doesn’t seem to be one definite source for the idea. It’s vague and true, a bit like the grass is always greener... Perhaps Dick Whittington comes close. He believed it and became a hero, someone to be emulated.
We’ve always admired poor people who go off and seek their fortune and are successful. Without that idea there would be very few folk tales! We even admire people who fail but have, at least, tried. Think of all the men who went to America or Australia in search of a better life: the 49-ers, the £10 Poms...

People have always moved. Throughout history there have been mass migrations of people into other lands.
We are all immigrants. Everybody in the world apart from those in sub-Saharan Africa, are descended from a small group of people who left Africa and managed to survive in an empty world. Can you get braver (or more desperate) than that?
Much of Western civilisation is built on the Judeo-Christian philosophy of a people who set off from Ur, wandered through the desert and, when they saw a land flowing with milk and honey, took it by force, claiming that they were promised it by their god!
Britain was empty at the end of the Ice Age and was settled by various waves of immigrants. Over the millennia peoples came and went. We British have always been split. We talk grandly of how welcoming we are, how charitable, how ‘Christian’ but we are also narrow minded, xenophobic and keen to keep our little island ‘pure’.
Other countries are the same—think of the recent Balkan wars when people who, to us, seem identical killed each other for reasons rooted in distant history. Think of Northern Ireland in the 60s. The USA cannot come to terms with its racial mix. A possibly apocryphal story from Australia says that when a Minister made a speech about repatriating all the immigrants an Aboriginal leader asked ‘When are you leaving?’
Desmond Tutu puts it beautifully: “When the white missionaries came to Africa they had the Bible and we had the land. They said 'Let us pray'. We closed our eyes. When we opened them we had the Bible and they had the land.”

Today the vast numbers of people moving around the world—all over it, although we tend to only look at our very tiny local part—is probably unprecedented and is causing problems in many places. Australia has resorted to strong-arm tactics; Lebanon is sinking under the weight of Syrian refugees; the boat loads crossing the Mediterranean to Greece and Italy are putting overwhelming problems on their already weak economies; those coming overland through Turkey and the Balkans have caused Hungary to build a ‘wall’; even Germany, which takes more immigrants than any other country in Europe, is feeling the strain; and we, in Britain, are feeling threatened by the thousands trying to ‘swarm’ (David Cameron’s word not mine!) through the Channel Tunnel. (3000 plus in Calais: 400,000 per year into Germany!) It all seems an insurmountable problem, at least in the short run. Meanwhile we squabble about numbers and quotas and quibble about whether they are asylum seekers, economic migrants or just people like my grandfather, trying to better themselves. Does it matter? They are men, women and children who are willing to risk terrible dangers and hardships to find a better life. I think we’ve got to accept that a lot of the troubles they are escaping from are of our making, whether it was in the way we colonised their countries in the 18th century, divided up the world by drawing arbitrary lines on maps in the 19th, or interfered in the politics of their countries in the past couple of decades.
Look up some of the traditional songs about emigrating, there are lots of them, particularly from Ireland. It might be relevant to sing one next time you go to the folk club!

I might write on a related topic next time, it depends on whether it works out. Keep your eyes open. Please have a look back at previous posts too and comment if you feel like it.

If you'd like to know more have a look at my web site  http://www.petecastle.co.uk
You may also like to consider subscribing to Facts & Fiction storytelling magazine (  http://factsandfiction.co.uk  )  It's quarterly and covers all aspects of storytelling with news, reviews etc