The Factory Girl is a traditional song which is known all over Britain. There are English, Scottish and Irish versions which are all very, very similar. Some people claim that it is an Irish song – but then there are some people who claim that any good song must be Irish!

I once had a conversation with a very well educated Romanian woman in London; I had been singing my songs and she asked me “Are they Irish?” “No,” I said “they are English.” “But there aren't any English folk songs” she said. When I assured her that there are she wondered how come she had lived in London for 10 years and never heard of English folk songs before, although she was aware of Irish ones!
If you click here you will find my version of THE FACTORY GIRLand then you’ll know what I’m talking about!
The idea of the Gentleman, or Nobleman, wandering through the countryside and meeting a beautiful young country girl is widespread in song and literature from the Georgian period onwards.
In early songs she’s usually a milkmaid but with industrialisation she became ’the factory girl’.  Sometimes he falls in love and marries her, sometimes he just seduces her and goes on his way. In this song I believe he has really fallen for her but she is an independent, modern woman and will have none of it - “My friends and my comrades they would all frown upon it...” so he is left to wander, broken hearted, through “high hills and valleys where no man will know me...”
I've known the song The Factory Girl for a long time. I recorded it on an LP – Punk's Delight – back in 1984 but I don't particularly like that version. It has a big, lush backing – fiddle, viola, whistles etc – there is some smashing playing and it's a good arrangement but it's all too pretty. I much prefer it unadorned like this where the message can come through.


I live in Belper, in Derbyshire and one of my favourite walks – in fact one of my favourite places in the world – is North Lane on The Chevin. North Lane is claimed by some historians to be a Roman road. I don't doubt that the Romans used it to take lead from Wirksworth to Chester Green but I think it's an older route, one of those which has been used for ever. In more recent times it was used as a drove road and also a coach road to avoid the swampy River Derwent valley. Now it is a very well used footpath. It can get quite busy on a summer Sunday afternoon and you are likely to meet everyone you know! It’s even better though, in the winter when you can walk the whole way without meeting a soul. Then it is very atmospheric and you can feel the history.


(Chevin is the Belper version of the old Brittonic word Cefyn, which still exists in Welsh, meaning a wooded ridge, so the name has been around since pre-Roman times.) 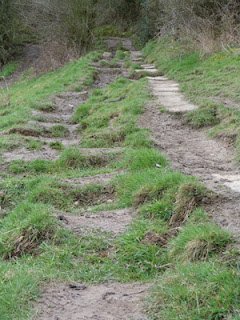 The walk up to, or down from, the Chevin to Belper and its famous mill is illustrated in the video of this song—click the link above if you haven’t already!  Whenever I go there I find myself singing the Factory Girl. It's very apt because generations of factory girls probably walked that path from Farnah Green and other villages west of Belper to go to work in the mills.


Belper is the central point of the Derwent Valley World Heritage Site which stretches from the Silk Mill in Derby to Masson Mill in Matlock Bath. It can claim to be the place where the Industrial Revolution started. (Other places such as Ironbridge make the same claim, of course!) Cromford Mill is where the factory system was perfected. Richard Arkwright's mill there was the first one to use water powered machinery and to employ a large workforce for which he built a village – to turn a manu (hand) - factury into a machine factory. World Heritage Site


The Belper mills, about 10 miles south down the Derwent, were founded by Jedediah Strutt, a friend and business associate of Arkwright, and he refined the system by introducing all kinds of inventions such as fireproof mills and metal framing which later made skyscrapers possible. The Strutt dynasty went on to completely reshape Belper which had previously been a tiny, unimportant hamlet best known for nail making. At one time the Strutt’s factory site of 4 mills was the largest industrial site owned by one company in Europe! As well as the mills they built schools, churches, a chapel, a swimming baths... gave land for parks and were generally benefactors for the whole town. The housing they built for their workers was well built and is still much sought after. I live in one of their last houses built in 1912, the same as the East Mill. The Strutts were not entirely without vices however, they had their foibles. For instance there's a nice little footpath which cuts off a corner on the main Ashbourne Road but it was solely for Strutt use. If anyone else used it there were serious punishments such as losing your job! And you could be fined for whistling or spitting. It was best to keep in with them.


So although the song is a nationally found one I often include it in sets of local material because it fits so well.
LINKS:

MY WEB SITE
MY YOU TUBE
FACTS & FICTION STORYTELLING MAGAZINE