IDENTITY: WHO AM I?

They were the opening lines of a long rambling song I wrote in my psychedelic phase back in the late 1960s. I’ve always been interested in identity and the image we choose for ourselves. It has become even more relevant in these days of social media and computer games - you can be whoever you want to be. I could create an avatar and become a nubile young woman! 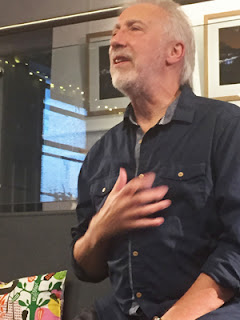 Another example of choosing your identity was the address we used to write when I was a kid:
Pete Castle, 1 Any Road, New Town, Oldshire, England, UK, Europe, Northern Hemisphere, The World, The Solar System… Where do you go after that? What’s the name for our galaxy? Has it got one? We can choose to identify with any or all of those parts. And our identity can change as the years pass.
I prefer to call myself English rather than British (‘British’ conjures up pictures of the Empire and Raj, whereas ‘English’ is much more rural and proletarian) but I’m pleased to be European and will be voting to stay in the European Community. We are, of course, all members of the human race. In fact we are all Africans! Something which struck me quite recently was this: when I was young I accepted what I was taught—that black people were adapted to cope with the tropical climate. In fact it’s the other way round. The first people, in Africa, must have been black and it’s us white people who are adapted to cope with cooler climates.

I’ve had several identities in my professional life. I was born and brought up as a ‘Man of Kent’ but I left there before I took up music or storytelling seriously. When I went professional I was living in Bedfordshire and had a lot of local material in my repertoire so I became known as a ‘Bedfordshire folk singer’. When we moved to Derbyshire I vowed not to learn any Derbyshire material because it and the accent were so foreign. But that didn’t last long! Although I think I still sound southern—or perhaps rather neutral accent wise—I’ve been here for 30 years and now think of myself as coming from Derbyshire and I do perform a lot of local material, both songs and stories (but not dialect). However, in 2007 I was asked to represent Kent at the Smithsonian Folklife Festival in Washington DC so I had to quickly re-invent myself again—turn back the clock to my Kentish self!


As a folklorist I’m interested in origins, migrations, immigrations and how people have moved around the world taking their customs, songs and stories with them—I’ve mentioned aspects of it in several previous posts.


I’m also interested in my own roots. I started researching my family history about 25 years ago and have done it sporadically ever since. I took my four grandparents and followed their direct lines back as far as I could. I seem now to have got as far as I can. I do occasionally find something new and interesting but it is padding out the knowledge rather than finding new people.
But… no, wait until later…


The most interesting thing, which I discovered very early on, is that they are not interesting, they all come from the south of England. Most people seem to be able to come up with an Irish great-grandma or a granddad from the Scottish isles or something exotic like that—think of the number of footballers who are eligible, through a grandparent, to play for a country they’ve never set foot in. I haven’t found anyone like that. It doesn’t make my family any better or worse than any others but I suspect it must be quite rare…?
But… no, be patient…
Granddad Castle (above) came from Folkestone in Kent and his family seem to have lived there for ever. I suspect that the castle they took their name from might be Dover Castle. His wife, a Hardiman, came from Canterbury where her family had lived for a couple of generations since her grandfather moved there from Dorset. (Why, I have no idea.)
On my mother’s side her father, Henry Hull, was a Londoner and they had always been Londoners. Many of them still are. Her mother, was a Payne, from Wiltshire. They were a family of shepherds. So all four families were pretty well ensconced in their own communities and it was only the odd individual who travelled. I have said (only half jokingly) that I was the first one in the whole lot who dared to travel north of the Thames!
A thing I would like to do, and might do one day, is to get my genome tested, to see whether it is entirely southern English or if there are any surprises lurking somewhere along the way. There might be one!

And here it is... what you were waiting for…!

My great-great grandfather William Hull (b.1815) married someone called Sarah in 1838. I know that. This was in the Somers Town area of London, a notorious slum which Dickens wrote about. Because there were several William Hulls living in the same place and probably because it was such a deprived area and they might not have filled in all the census information etc I have been unable to find any more about them so couldn’t go back any further. But, someone else, who was researching a different branch of the family, told me that Sarah’s surname was Shonk. I thought that was an unusual name but so what… It didn’t help.
Then, quite recently, a friend asked to look at my research and immediately said ‘Shonk, that’s a good old Jewish name!’ And it is. It’s an Anglicisation of either the German Schonk or the Czech Sonk. It would make sense for a Jewish family to be living in Somers Town in the 1830s so perhaps I have some Jewish genes!

I still haven’t been able to find out any more. I applied for their marriage certificate but the GRO were unable to find it. (Perhaps they didn’t officially marry!?)
I find it quite exciting. I don’t know why. It doesn’t make any difference to who I am but if and when I do get my DNA results there might be a little bit of the Middle East lurking somewhere there amongst all the very local material!

At the end of May I’ll be running a workshop for Belper Arts Festival about turning your family history research into stories as a way of making sure it gets remembered. Here is a tale I tell quite often about my great-grandfather, the shepherd, William Payne.

In the days when he was working shepherds often spent all their time with the sheep, it was a very hands-on business, especially at lambing time. William had one of those shepherd’s huts on wheels up on the Downs and his habit was to come home every evening for a meal and then to take more provisions and go back up to his hut.
One evening he told his wife that there was a task he wanted her to do for him:
“Go and see the master, and tell him he’d better be finding a new shepherd” he said.
When she asked why he explained that while he was up with the sheep he had fallen down and he’d seen angels coming to take him away, so he knew his time was short.
Then he sat down and ate his meal and remarked on how tasty it was.
“I’ll just sit in my arm chair and have 40 winks and let my dinner go down before I go back out” he said.
He sat down, went to sleep, and never woke up again…

I often combine that with The Shepherds Song but Shepherd O Shepherd works just as well:
CLICK TO LISTEN TO SHEPHERD O SHEPHERD.

You could have a look at my web site  http://www.petecastle.co.uk
My You Tube channel contains a lot of videos of both songs and stories.
See   https://www.youtube.com/channel/UCq6xTFVShO_jo3Y-Q9rU9Hg/videos

You may also like to consider subscribing to Facts & Fiction storytelling magazine which I edit   http://www.factsandfiction.co.uk   It's quarterly and covers all aspects of storytelling with news, reviews etc

Have a look at the previous postings below and if you have any comments please post them. I'd welcome your (constructive) comments.