Dragons, or dragon-like creatures, can be found in almost every mythology in the world. They have been with us since time began. No-one knows where the original idea came from or what inspired it although there are many theories which range from an inherited, species-wide genetic fear of snakes, to the discovery of dinosaur bones by our early ancestors, although that idea was probably invented by the romantics of the Enlightenment. No one of these ideas alone can be wholly accountable though, we just know that human imagination and fears have created a monster which has lived with us since the beginning of time, was a warning on the edge of ancient maps, and in a slick, aero-dynamic form is growing ever more popular in today’s world of TV box sets and computer games. 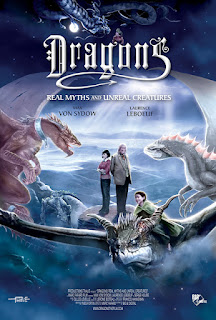 For the sake of this article I’d like to split the world of dragons into two: Eastern dragons—Chinese, Japanese, Korean—have probably influenced our thinking a little but only in more recent centuries and largely through their depiction on pottery and in prints. The influence was probably felt more by artists and poets, and the aristocracy , rather than by the ‘people’.

The Western dragons are the ones which most concern us. They have become an integral part of our folklore and modern fiction and even, in a way, of our religions and national identities.

We all know what a dragon is like and what it does. In a way there is only one dragon story and it can be found in the Norse sagas, in Beowulf, in the legend of St George, and as Smaug in the Hobbit.
Briefly the standard dragon story goes: the dragon, which has been slumbering in the corners of the memory, suddenly bursts out of the fringes of the world, perhaps because he has been disturbed by a trespasser who might have stolen a jewel from his hoard, and it lays waste to the land by flying around, eating cattle, sheep and young maidens, and by breathing fire. When the country is on its knees and everything else has been tried a hero appears and manages to subdue or kill it.
There are numerous versions and I included a little known one set in Chesterfield in my book of Derbyshire Folk Tales (I suspect there are others in many of the other books in the series): 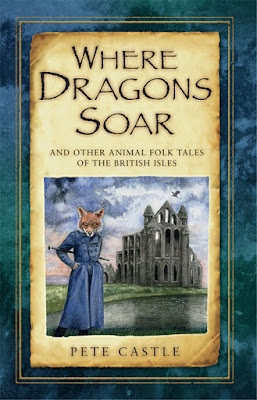 “...a dragon flew down from the north laying waste all the countryside in its path. A brave priest attempted to stop the dragon by climbing to the top of Winlatter Rock which is on the moors near Chesterfield, and spreading his arms in the form of a cross. The dragon could not pass this holy sign so it summoned up great winds and storms to lash the holy man and blow him from the rock. But the priest refused to move. He stood there so long and so firmly that his feet sank into the rock and left an impression there which can still be seen to this day.
Years later the dragon, perhaps guessing that the priest was dead, came back and once more started spreading destruction around the area.
Three brothers took a huge iron bar to the blacksmith and asked him to forge it into a sword…. When they reached the summit of the rock one brother rested the sword in the priest's footprint while another ran back to Chesterfield to call out all the local men to come with their swords to help. The third brother went to the church to keep lookout and to ring the bell to sound the warning when the dragon appeared.
After a few hours the dragon arrived, flying through the evening sky like a fiery airship, destroying buildings, woods and crops as it passed. It blew a huge plume of flame towards the gigantic sword which glowed red hot like a beacon. The men of Chesterfield who were gathered round the rock held up their swords like a forest of crosses and they reflected the light back at the dragon. The dragon turned tail and sought out darkness and safety down in the depths of the Blue John Mines near Castleton where he remains to this day, waiting until it is safe to attack Chesterfield again.

The depiction of a dragon as being like a lizard with wings is a comparatively recent idea. It was developed in the Middle Ages when it was part of the whole idea of chivalry, good Christian Knights, King Arthur, the Round Table etc. It was influenced by the old British/Welsh legends of the Mabinogion and earlier, particularly the story about the two competing red and white dragons imprisoned under Vortigern’s castle in North Wales.
In earlier times dragons were more associated with dwelling in water rather than in flying through the air. Even the dragon which St George famously slew came up from the depths of a lake to devour the young maidens who were sacrificed to it. (This is, of course, a retelling of the earlier Greek myth of Perseus and Andromeda right.)
Further back the idea of the monster from the depths is found in the Old Testament of the Bible with the image of Leviathan which draws on Jewish and other Middle Eastern religions. 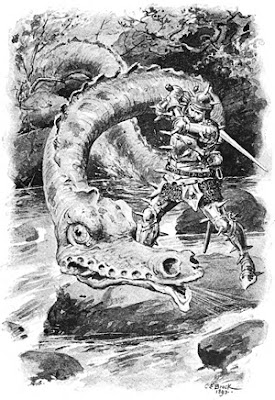 In many of the North European and Scandinavian mythologies the world was created from the bones of an enormous sea monster, the different parts of its body becoming the islands and seas. In a simplified form it has come down to us as the well known folk tale ‘Assipattle and the Muckle Mester Stoor Worm’ in which a very unheroic hero (Assipattle is a nickname for someone who likes to laze in the ashes by the fire rather than go out and do a hard days work) kills the monster by sailing into its mouth, down to its stomach and then setting fire to its liver! In its agony the stoorworm vomits him out again.

Worm, also spelled wurm or wyrm, is, of course the old Germanic and hence English word for a dragon. In many ways it is a far better description of the creature in its earliest form and it is a word which is preserved in many British landscape names, often places which have circular ditches preserved like the Worm Hill near Buxton or another near Washington, Tyne and Wear which is just down the road from the setting of the famous Lambton Worm tale. (Wormwood Scrubs was a place famous for the number of snakes found there!)

Another name for a dragon is drake or dracu which harks back to the ancient Greek source ‘drakon’ and from that we get the famous name Dracula. The real Vlad Dracula, far from being a literary vampire, was a Transylvanian warrior and hero who, like his British counterpart—King Arthur’s father Uther Pendragon, had a dragon as a symbol.
Why are we still so keen on dragons then? Why do we enjoy them, even love them – particularly the friendly ones like Pete’s Dragon? I think that, if we imagined them into being to explain various freaks of weather or geological events then we now see them as the ultimate Super-Villain. But, a Super-Villain which is defeatable as long as the right Super-Hero comes along... and who knows, perhaps we could be that Super-Hero. If Assipattle can do it then so can we!


Most of the dragon tales mentioned above, along with several others, can be found in my book 'Where Dragons Soar and other animal folk tales of the British Isles' along with stories of real cats, dogs, cows, wolves and so on.

Pete Castle has been a professional folk singer and storyteller for over 40 years. He has worked all over the UK and occasionally abroad. He has a range of books and CDs available from his web site.