“Then Lazarus laid him down and down, and down at Dives door, Some meat some drink brother Diverus bestow upon the poor…”


I don’t enjoy Christmas. I don’t think I ever have really. As an atheist Christmas doesn’t mean anything to me from a religious point of view. As a folklorist I can appreciate the need for a mid-winter festival and, in ‘the old days’ - whenever they were - the need for a break from work and the chance to let your hair down. The way we celebrate Christmas nowadays, though, has little to do with old traditions, it’s largely new traditions invented by multi-national companies in order to grab our money! (Even Father Christmas/Santa Claus, in the guise that we know him, was largely a marketing ploy by Coca Cola!)


That makes me sound like a Scrooge.
Whereas in pre-Victorian times Christmas started on Christmas Eve (or possibly even on the Day itself) now the build-up goes on for three months and most people are sick of it before it comes, literally and metaphorically! The writer Alison Uttley, who lived just up the road from where I live now, described how, around the turn of the 19th/20th centuries, her family posted their Christmas cards on Christmas Eve and the postmaster himself came to deliver cards to her house on Christmas morning! I wouldn’t go that far—even the poor old postmaster needs his day off! I’m not that much of a Scrooge!

Although I don’t make a big thing of Christmas I have done some enjoyable Christmas Shows, and I have a repertoire of seasonal material which I am happy to perform. It’s mostly old and not overtly religious. There are a couple of seasonal stories I particularly like.
One I posted on You Tube last year is The Man Who Stole the Parson’s Sheep. (It’s also in my Derbyshire Folk Tales book). It’s about a poor lead miner who ensured that his family had a good Christmas lunch...

LINK TO THE MAN WHO STOLE THE PARSONS SHEEP 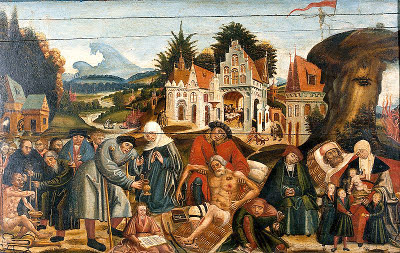 A song I use a lot is the old ballad of Dives and Lazarus (or “The Merry Ballad of Diverus and Lazarus” as it was described back in Elizabethan times.) Although it is not about Christmas and is definitely not a carol it used to be widely sung at this time of year, probably because of its message of giving alms to the poor. It’s a song I’ve known for about 40 years but, for some reason, it’s never made it onto any of my CDs. It goes well with the poem Christmas Day in the Workhouse. They both point up the hypocrisy and greed which become so apparent around now. When you realise that Dives is not actually a name but Latin for ‘the Rich’ it becomes even more relevant to society today. It’s a song about the ‘class war’ and equality and everyone supporting everyone else.
Here’s a link to my version on You Tube where there is also some more info about it.

LINK TO DIVES AND LAZARUS

The general public assume that Christmas is one of my really busy times but the opposite has always been true. The months of December and January have always been quite quiet work-wise. The kind of places where I do the bulk of my performing usually do something ‘different’ for Christmas. That can be spending a bit more money and booking a really special guest—perhaps a group or a really big name, or, they have a party with special turns performed by their regulars. Sometimes they even put on a pantomime or mummers play or just have a party. Anyway, it means they don’t book me and the bookings I do get during I this period I approach very carefully and with my fingers crossed…
I’ve lost count of the number of times I’ve pointed out very forcefully to the organisers that I don’t sing carols, I don’t dress up like Father Christmas, I’m not a stand-up comedian... but when I’ve got there I’ve been forced into strumming along to Silent Night, or calling the raffle or the bingo, or playing party games! I must come over like a real Scrooge! “Bah! Humbug!”
But it would be even worse if I refused. 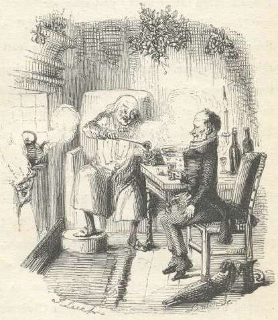 Here is a little story which exemplifies the difficulties. A few years ago I was approached by quite a large local business. They were holding a Christmas party for their employee’s children and wanted me to come and tell some stories. It sounded great and I wasn’t feeling at all Scroogish. They seemed to understand what I was willing to do and they were willing to pay good money! So I agreed to do it. It was a good party in many ways but… when I arrived I was shown my spot for telling stories: it was just up the corridor from the disco and right beside the bouncy castle! And I mean right beside! Even with no kids on it a bouncy castle makes a lot of huffing and puffing and wheezing noises. I pointed out that it was an impossible spot and asked for somewhere else and they hunted round and found me a much more suitable site—a small room just off the main space but not too far away. I now had to get an audience so I asked the MC to announce it and a couple of people rounded up anyone who was interested. At last I had a space and I had an audience… but this had all taken quite a while and half the afternoon had gone. I said hello to the kids, drew a breath and was preparing to launch into the first story when... the door opened and someone popped their head round and said “Santa’s just arrived!” Whoosh! Went my audience and disappeared never to be seen again. So I did too. I picked up my things and went home. Next day I sent in my invoice and got paid for doing absolutely nothing! Scrooge would have been gloating but I find that sort of thing infuriating. 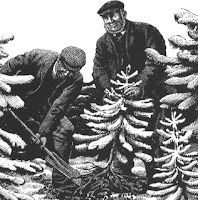 At the beginning of this I mentioned our local author Alison Uttley: something I’ve done for nearly 20 years now is the Alison Uttley Christmas Show. Joyce Varty reads from Uttley’s many writings (she’s best known for her children’s books—Little Grey Rabbit and so on but she wrote a lot of essays for adults, mainly about growing up in Derbyshire 100+ years ago, and Christmas features strongly) and I put in some relevant songs. It’s particularly suitable because she quotes or mentions quite a few songs in her writing and, where possible I use her versions or try to find another local one. We’ve decided to give it a rest this year because I feel it’s served its time. It’s always attracted an older audience and a lot of the people who used to come can’t any more. There don’t seem to be many younger ones waiting to take their place so it’s been getting increasingly difficult to get a reasonable audience. Several people have said it’s a pity so I’ll probably be branded as a Scrooge for that too—for spoiling their build up to Christmas.

And finally, just to prove I’m not that much of a Scrooge, let me wish you everything you’d wish for yourselves at this time of year, and plenty of it.

If you'd like to know more have a look at my web site  http://www.petecastle.co.uk
and the site for FACTS AND FICTION, the storytelling magazine which I edit http://www.factsandfiction.co.uk


My You Tube channel contains a lot of videos of both songs and stories.
See  https://www.youtube.com/channel/UCq6xTFVShO_jo3Y-Q9rU9Hg/videos