One of the things people often say to me after a gig is ‘How do you remember it all?’ memory is vital to a performer...  but it’s not to be trusted. Here’s a true story.
Many years ago—back in the 1970s/80s—I did a lot of work in folk clubs in Dorset. There were dozens of them, in every little town and village, and I seemed to be down there every few months. On one occasion I was early so I stopped off to see the Hardy Monument. This is how I remember it:
I was doing a folk club in Martinstown and got there early. I parked at the pub (a typical picturesque little country pub with thatched roof and a hanging sign and a car park at the front...) and across the road was a field with a footpath across it. By the stile was a finger post pointing to ‘The Hardy Monument’. Thomas Hardy is one of my favourite authors so I thought I’d go and look. It was only about half a mile away on the top of a small cliff overlooking the sea. It seemed an odd monument for an author and when I read the inscription I realised it wasn't Thomas Hardy the author but the other Thomas Hardy—Thomas Masterman Hardy who was Nelson’s friend: he of “Kiss me Hardy” fame. It didn’t matter, it was a good experience and I remembered it. In fact I remembered it vividly and used the experience as an introduction to either of a couple of songs which I associate with Thomas Hardy, the author. This summer (2015) my wife, Sue, and I had a holiday in that area and I made a point of looking up the Hardy Monument again.
We found it and weren’t disappointed but I was amazed at how wrong my memory of the first occasion was. It is not just a quarter of a mile across a field outside the pub. It was a good 10 minute drive from Martinstown to the Monument so I couldn’t have strolled there. And it wasn’t on a little cliff overlooking the sea. It is on a large hill and you could just about see the sea in the distance! The Monument looked the same though! See the picture. 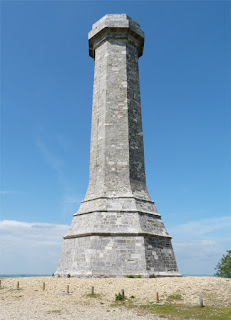 Thomas Hardy, the author, knew a lot about folk music—he was a fiddle player and was aware of many songs. In Thomas Hardy’s cottage, his childhood home and where he continued to live until he became famous and rich, there are several Broadsides pasted on the wall over his bed. One of the songs I associate with him is THE FEMALE SMUGGLER. It’s obviously set in his part of the world in the era he wrote about (which was a generation before he lived). He wrote a short story called The Distracted Preacher which is a close parallel to this song. He may have known it although it's not one of the ones over the bed.
In the story Mr Stockdale, a preacher, goes to lodge with a young widow – Lizzie. He is very naïve and she is obviously not as good as she seems... He doesn't see what is obvious to the reader - that she is in league with the smugglers if not actually one of them herself! Then, one evening, he gets back to the cottage early and finds her wearing men's clothing and obviously preparing to go out with the smugglers. She admits it but says she only does it in the winter time and when there is a full moon! (Which is the only time a smuggling run can be done, of course!) The story finishes with a long, complicated, typically Hardy, mess of events with people being shot and presumed dead and then appearing again, alive... Lizzie giving up Stockdale for her old love, Jim, but eventually Stockdale returning and marrying her.
I am not sure of my source for the Female Smuggler. It’s a song which was found widely on Broadsides and was collected by many folk song collectors so it could have been almost anywhere. I have a vague feeling that it was from a book of Shanties, although it obviously isn’t a shanty! It’s not surprising I can’t remember the details, I suppose, because it was getting on for 30 years ago that I learned it. The recording here was made for a cassette album ‘The Cottage on the Shore’ in 1989.
I've been posting a monthly video or slide show on You Tube for the past few years, this is one of them. Because of the limitations on the size of actual videos I can post here I'll sometimes be working them together in future. That's the case here.

SO HOW GOOD IS YOUR MEMORY?

Having difficulty remembering things is a perfectly normal part of aging. We all joke about it but we also, secretly, worry that when we can’t remember a word or a name it’s a sign of approaching senility. There’s probably a good scientific reason why we have those problems but the one I like best is that by a certain age your brain is so full of knowledge that it takes that much longer to access the bit you want—like your computer searching through a huge file. I find that the best way to remember that thing that is on the tip of my tongue is to think of something entirely different. It then suddenly appears.
But how about when you are performing? Have you ever worried that there might come a time when you won’t be able to remember the next bit of the story or the words of a song?
I’m not sure that it happens like that. At least I hope it doesn’t! I don't think you will ever turn up at a gig and not be able to remember anything at all. I think it will be just the odd item in which you'll suddenly go blank, and then, if you are a professional and have been doing it for long enough, you'll know how to get over that. This is not based on scientific research, just on my own observations, but I suspect that songs and stories live deep down somewhere in the parts of your brain where things survive in an unadulterated state - rather like a feezer. Once you can access them they are perfect. It's the part where your name and childhood memories and the bits which are integral to your ‘self’ live. Just as you can often remember things that happened 30 years ago but can’t remember why you went into the kitchen so you have no problem recalling whole songs and stories.
That is not to say that you never forget them. Everyone has the occasional lapse when a song just stops half way through and you cannot remember the next bit. It has nothing to do with age, it’s more about concentration. I know that when it’s happened to me it’s because a) I’ve been living the song or the story and have been unaware of the outside world and then, for some reason you come out of ‘the zone’ and you panic. Or b) something has distracted me and I’ve started thinking about that instead of what I’m doing.
I find that, with songs, it’s usually the beginning which goes a.w.o.l - I can’t remember the first line or even the tune. After a few seconds of thought I can usually pick up the chorus or a memorable ‘hook’ and then I’m away. It doesn’t always work! I remember an occasion many years ago—I was probably still in my 30s—at a high powered event I gave a long, informative introduction to a song, gave it the big build up, and just dried. I couldn’t remember it at all—not even the title! I had to sing something different!
A friend some of you may know (Roy Harris) tells a story which might be true, but probably isn’t, that he had to give up on a song because he couldn’t remember the chorus. When he got home he looked it up and the chorus was “ Fa la la la la la la la”!
Strangely it seems to be items which you know really, really well and have been doing for years in which you get a sudden lapse rather than a new one. That is probably because with a new item you are slightly worried and are concentrating really hard whereas with an old favourite you get too relaxed.
Stories tend to be different because, usually, they don’t have set words which it is vital to recall and as long as you can remember what has got to happen you can waffle your way into it. You don’t ‘memorise’ stories in the same way either, you know the plot so you just tell the story in the same way that you tell about your holiday, or what you saw on your way to work. (But a bit more fluently and imaginatively, I hope!) If you do forget a bit you can usually recover by saying something like— “Now I haven’t told you that while all that was happening…” In other words do a flash-back!

So fingers crossed for many more years of memory!

If you'd like to know more have a look at my web site  http://www.petecastle.co.uk
You may also like to consider subscribing to Facts & Fiction storytelling magazine (  http://factsandfiction.co.uk  )  It's quarterly and covers all aspects of storytelling with news, reviews etc